Its been a while since my last "real" post, but March is coming to an end. And with the convective season just around the corner, I decided to write down a few of my thoughts on the upcoming season 2012. But first, I will briefly cover the winter situation.

The most "watched" area is the ENSO region. After the King La Nina (I refer to it as the "King La Nina", because it was really something else than a normal La Nina) in 10/11 winter, there was a short period of neutral values in the ENSO 3.4 region.

This chart shows the actual sea surface temperature. I have marked the ENSO areas (regions):
Blue - ENSO 3
Violet - ENSO 4
Red - ENSO 3.4 (The main ENSO region, where the cycles are determined) 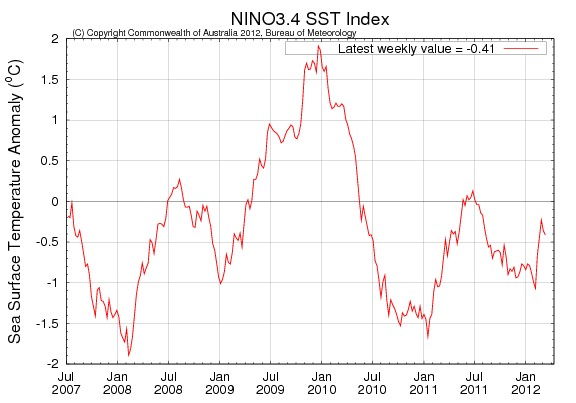 Important to point out, is also the ENSO3 region, with interesting dynamics in the last month or so. 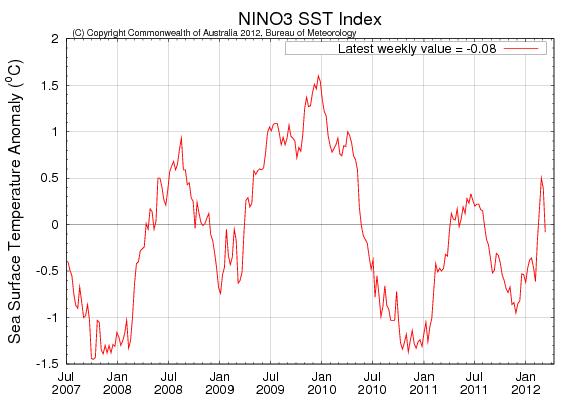 The 30-day Southern Oscillation index. There is a well visible difference between 10/11 La Nina and 11/12 La Nina, with much less positive values with the recent La Nina. Values above 8 are in favor of a La Nina, while values below -8 are in favor of an El Nino. 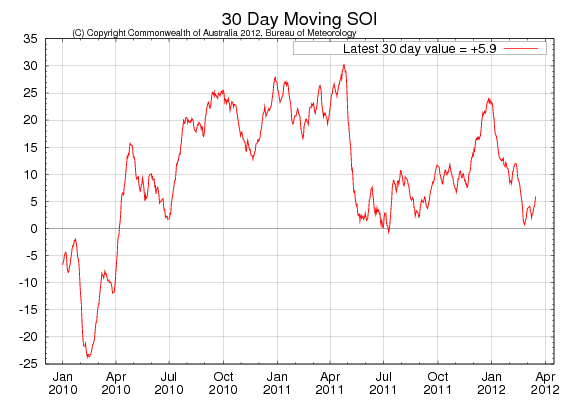 If I focus my attention on the patterns.
As we can see this March, a persistent "death ridge" is present over much of Continental Europe. This composite shows the 500hpa height anomaly from 1st to 16th March:

Interesting to point out here, is the that this pattern seems to be more common in El Nino years. This is a composite of March pattern in some El Nino years: 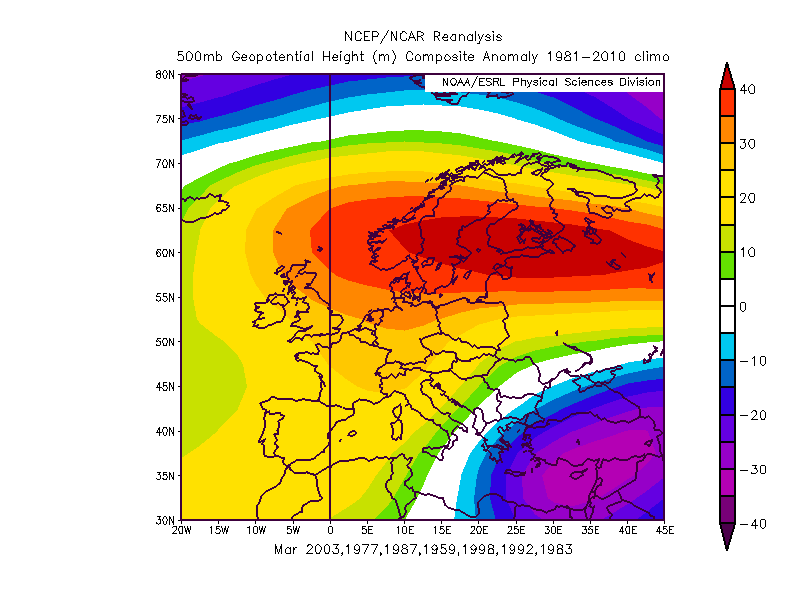 Its hard to say, but maybe there could be a connection between the dynamic ENSO3 region in the last 2 months, going up into positive values on the limit of an El Nino. The march heavy rainfall in Texas and Oklahoma in USA, kinda corresponds with the typical situations during a warm ENSO3 region.

Now that the march situation is out of my way, I am going look back at the start of the pattern, in October-November. La Nina came "on the stage" in August/September, so considering the 2-3 month Lag, It probably started to reflect in the before mentioned time slot of Oct-Nov.

First lets have a look at October. This is a composite, featuring years with similar La Nina/ENSO development. 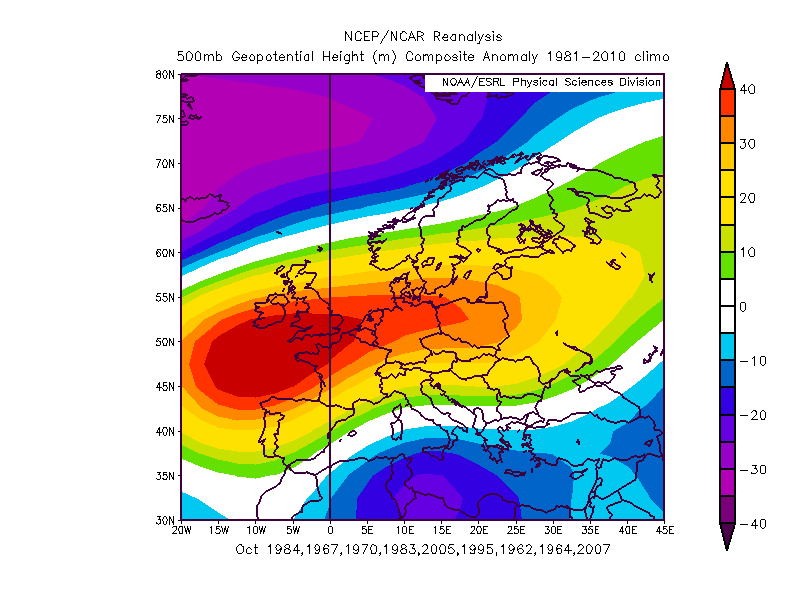 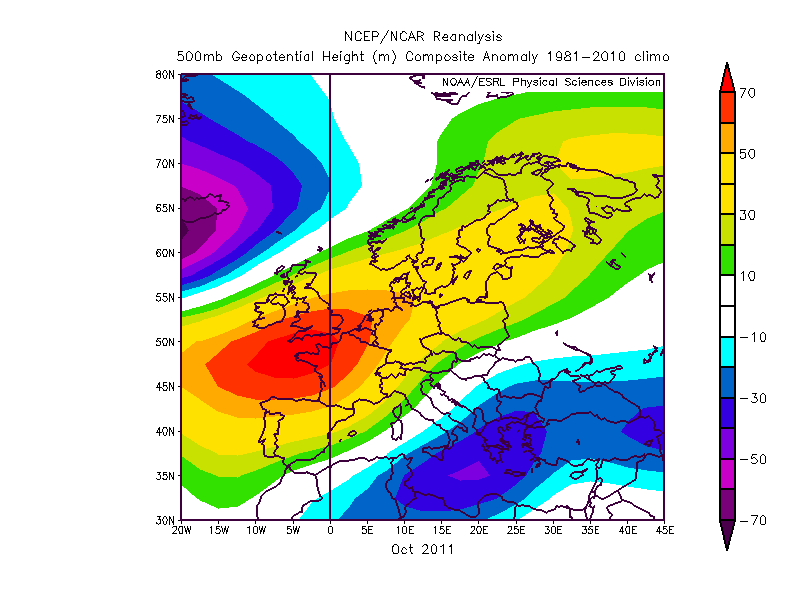 I think you see the connection here. :)

Next up is November. In November we had a persistent blocking over much of Europe, with the jet stream diverted up to north, around the strong ridge. 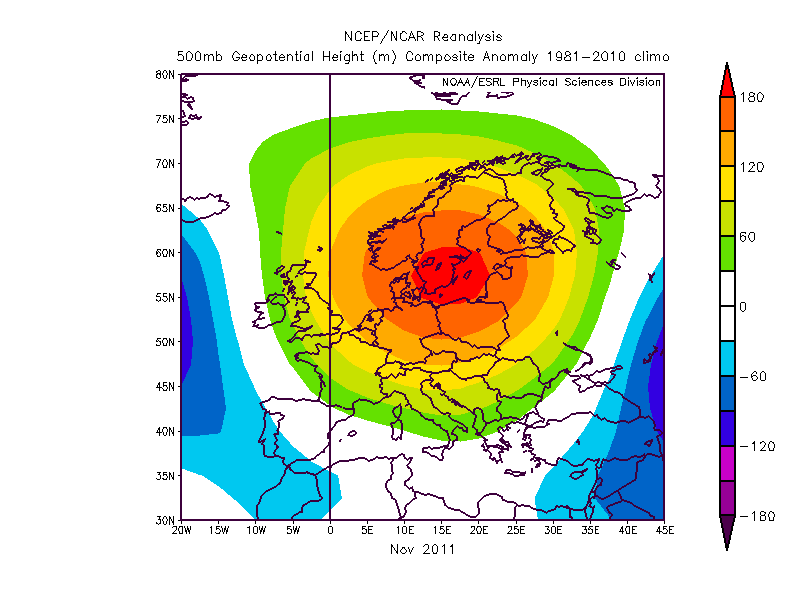 I had to look into older La Nina years, to find a similar blocking pattern in November (although less intense). 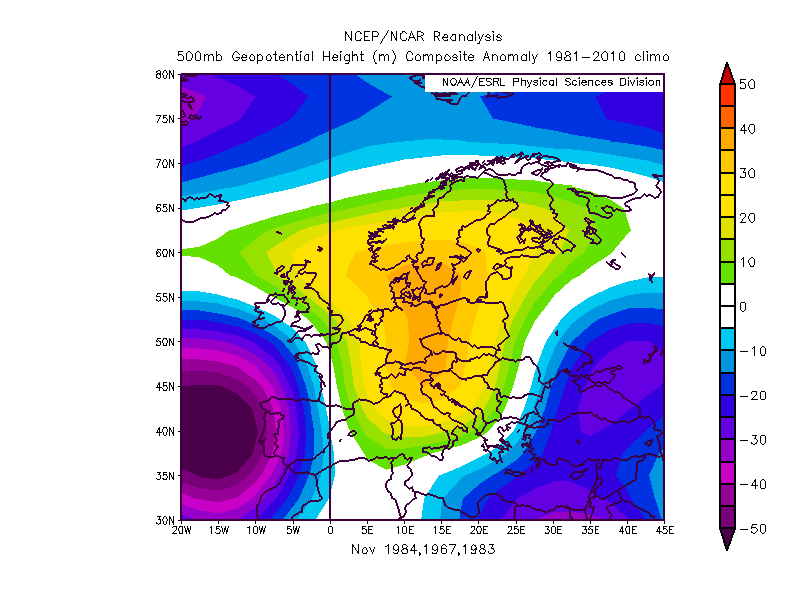 December had a big turn, with the ridge finally weakening and the zonal flow taking over. 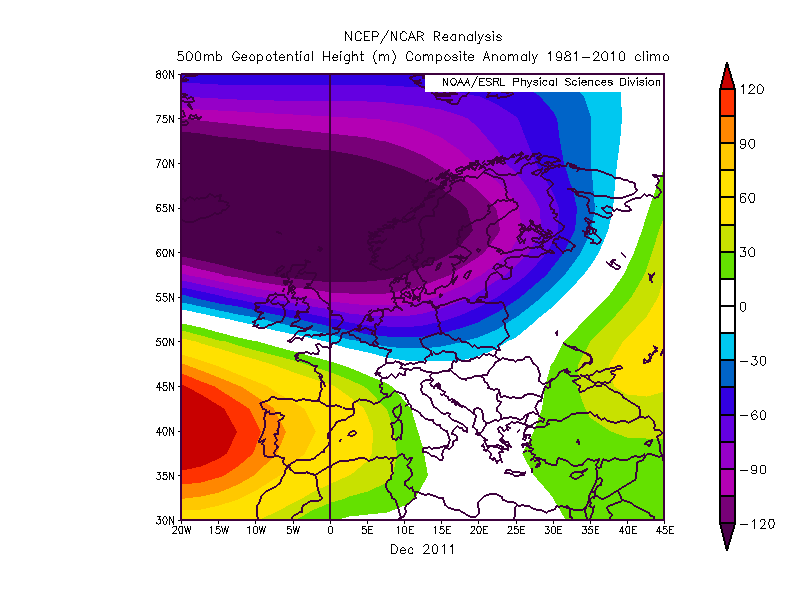 Finding a pattern like this, was a bit easier. I have found it in La Nina years of course, this time in the years, featuring a bit stronger La Nina events. 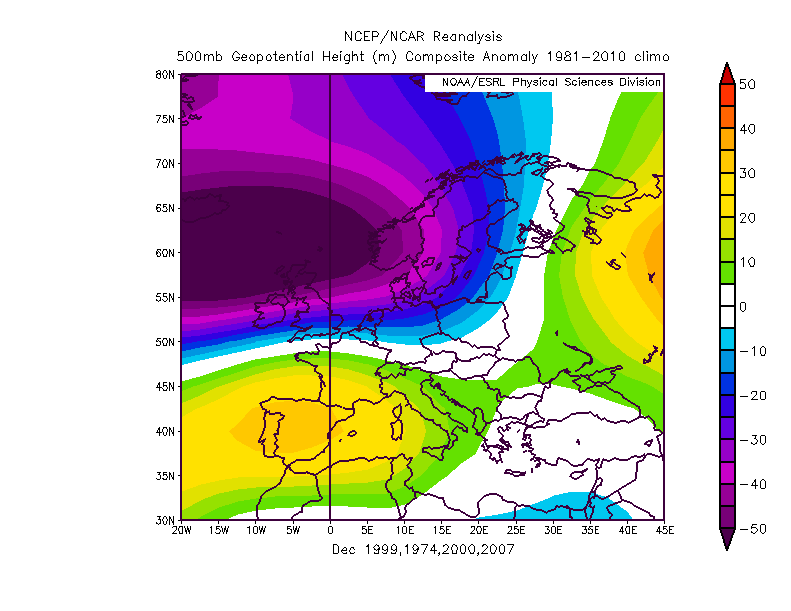 January to February period was also not that easy to find, but I have found it in range of fading/weak La Nina, or strong neutral negative ENSO. 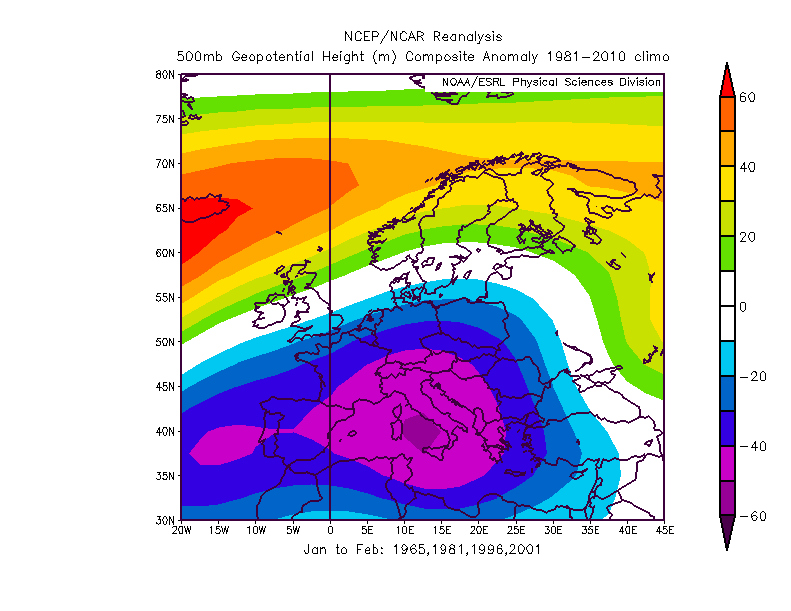 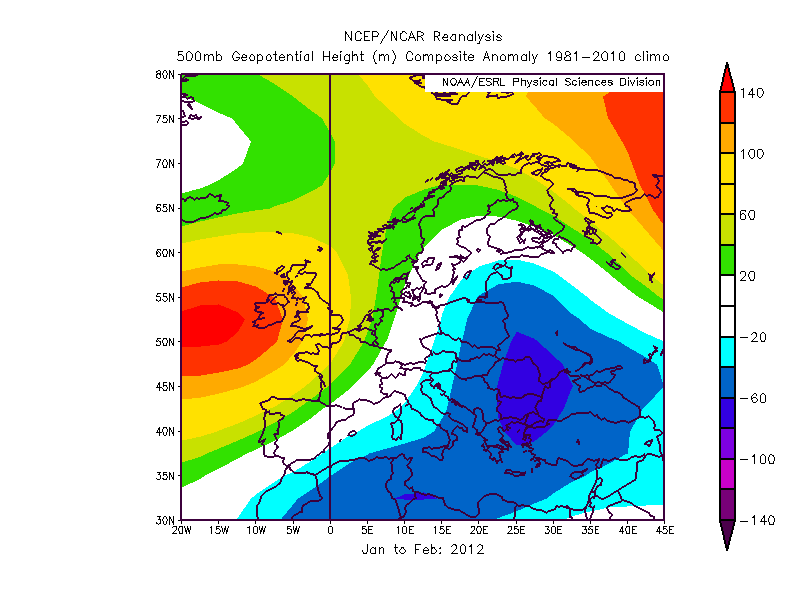 Now, we all remember the cold shot in February, which was mostly a result of a SSW event and Polar blocking, reversing the AO into negative, and featuring a zonal reversal over the continent.
I would like to point out, that jan/feb 1986 and 2006 were fading La Ninas + SSW combinations. 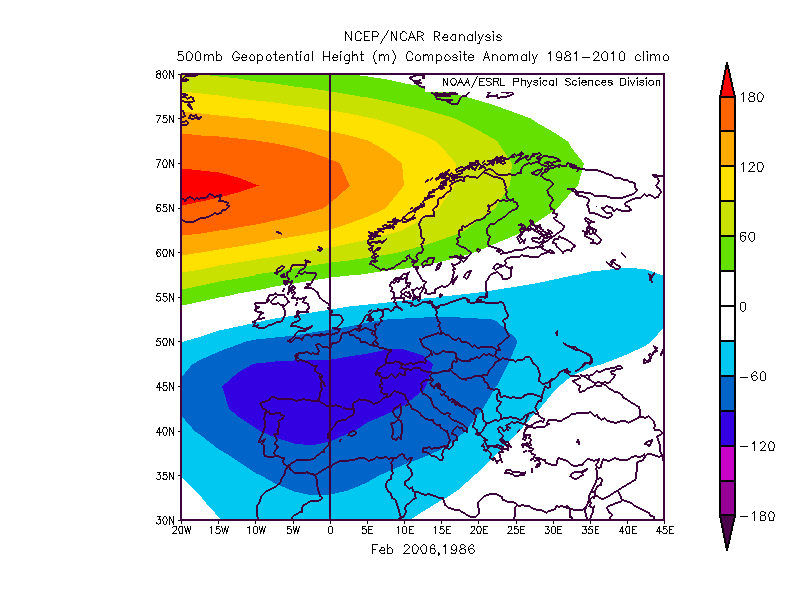 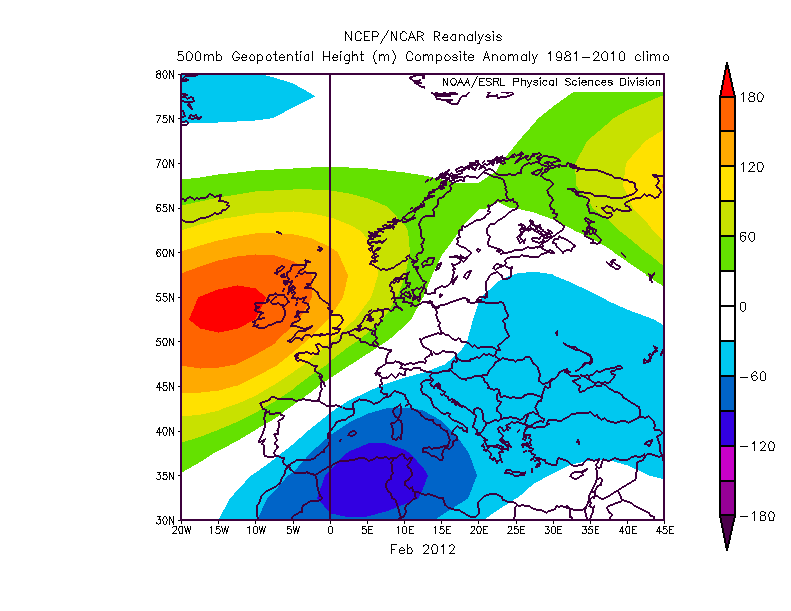 The cold period in February really looks brutal. And actually, it really was brutal.

2006 and 1986 were similar years with the same setup: Weaker La Nina and an SSW event. The outcome was quite similar too. A cold shot over continental Europe.

To wrap up the winter reanalysis, here are some temperature composites. The official winter period for reanalysis is DJF - December, January and February. 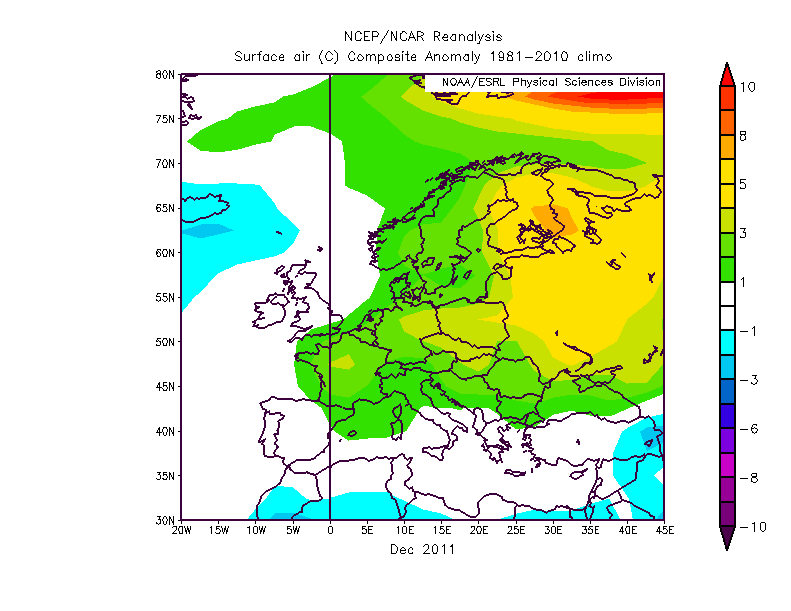 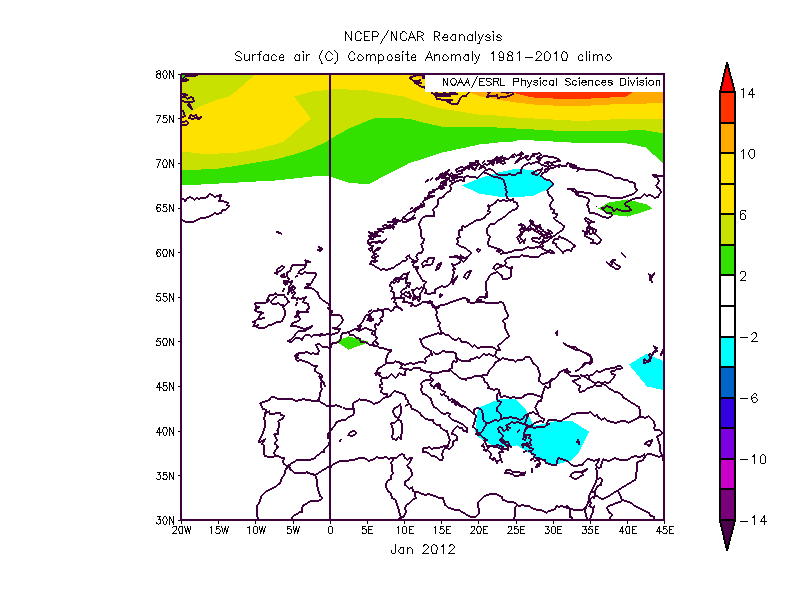 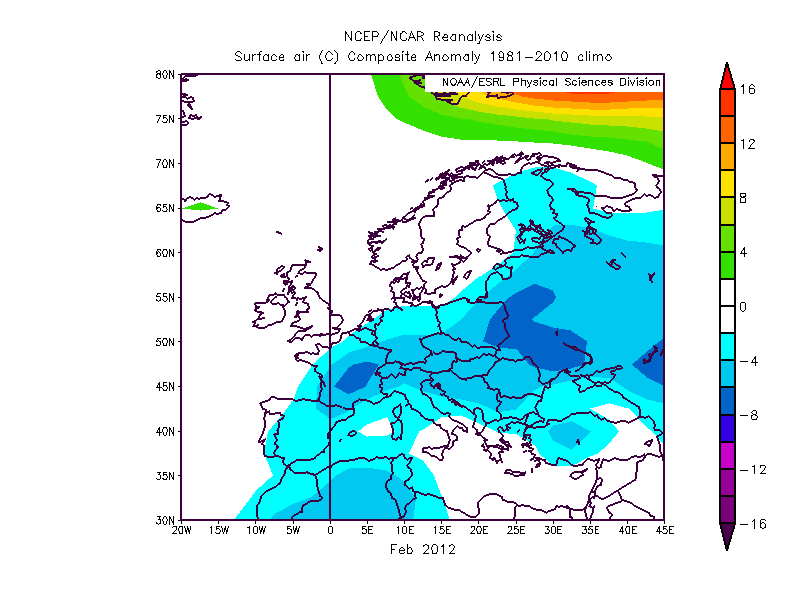 Temperature wise, the final outcome was an average winter, a bit cooler in North Africa and SE Europe. 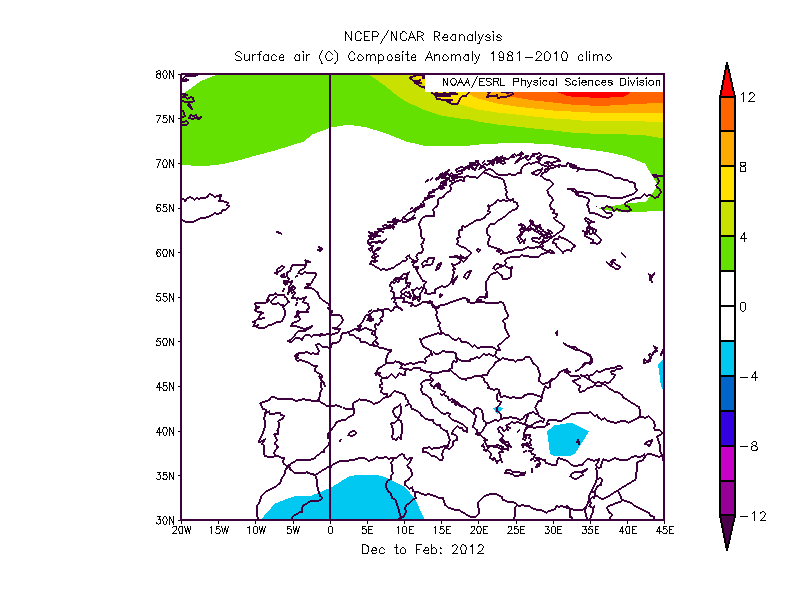 This winter reanalysis is very superficial, and with all this composites, I have to point out a few things. Basically, as we can see, this year there was a combination of many patterns, of which all happened in the past before, with the same thing in common: A weak/moderate La Nina. And also worth mentioning is the obvious inter-event variability of La Nina. Basically all the composites that I made as a comparison to this year, featured different variations of possible La Nina patterns. But we have to consider that ENSO is not the only thing that effects the patterns. We have the PDO, AMO, MJO, IOD, QBO, WPO, EPO, PNA, ITCZ, etc... And other oscillations and factors. But keep in mind this: PDO, ENSO, MJO, IOD,... are in a way dominant to AO, AAO and NAO. Consider the AO and NAO as "tools" of the main oscillations.

I mentioned MJO (Madden-Julian Oscillation), so lets look at MJO and the February/March pattern on the north hemisphere. If I remember correctly, MJO is more "effective" in ENSO neutral periods, in winter/early spring.

This is a chart, showing MJO movement in the phases in February/March, and the ECMWF forecast.

Since La Nina started to "lose the grip" in end of January, we will look at the 9-13 February, when MJO was in phase 8.

This is a composite, how the pattern statistically looks with MJO in pattern 8.

And this was the outcome this year. A very good match, featuring Blocking over Canada and Greenland, Low heights over Alaska, Europe, NW Asia and Eastern USA.

The 13-16 was a Phase 1, but MJO basically quickly ran over it, so no time for a real effect here, although there were some similarities over NW Pacific, which kinda get the first effects.

From 17-27 Phase 2 was in effect. Lets look at the composite and the outcome.

Composite has some major features: Block over EU, Low over USA and NW Asia, meridional flow over Atlantic, blocking over Pacific, and Low height over polar region/Greenland.

The outcome had the main features as the typical Phase 2 February pattern.

March 1-5 was Phase 3, but slightly fast. The main similarities were in EU blocking developing, and lowered heights over Canada and Eurasia.

March 5-12 was a phase 4. Although at first the pattern might not looks so similar, you can see the main features lining up quite well.

And the outcome. Features to notice, are ridging over USA all the way over the Atlantic, where the Azore High is ready to expand, strong Block over Pacific, and China High surrounded by Lows.

12-16 March Phase 5 came into play. ENSO was/is well neutral at this point, probably giving some room for MJO to work I guess. :D

And the outcome. The similarity is quite amazing. Main features too look for: USA ridge, EU blocking of course :), Alaska Low, Pacific High, The Low east of EU blocking, the overall Asia setup.

Looking back at the composites, you can notice that years 2006 and 1986 are quite common in the MJO Phase composites. If you look back up the post, at the February pattern, you can see why.

Now, the future takes us into Phase 6.

This is the composite for Phase 6 in March.

And the ECMWF/GFS 8-10 day forecast. The similarities are obvious. EU Blocking, a Low east of this block, USA Ridge, Canada Low, High over the Asian side of the polar circle, Pacific Ridge...

Now I look at the MJO more like an indicator of the status in the tropics and the patterns that result out of the tropic region status. Ut can indicate changes caused from the Indian Ocean Dipole and the ENSO.

Well, this is enough for the first part of the season outlook. :) Not really anything or much about the storm season in this post, but we have to understand the current situation before going into the future. :D
It took a lot of time and effort for this first part, but I hope at least some of you will understand what its all about. :) If you even read it whole of course. :D
And if you noticed I never mentioned climate change. Its impossible to say climate change about patterns that already happened 50 or more years in the past, but people seem to forget about it of course. All in all, nothing new this winter, comparing with past events. :)

All of the text is my own writing. So just in case anyone plans to copy something out of it, I would like to know about it first. :)

This post features my own view on the weather situation in the winter, and some thoughts about it. Nothing official!

This is part 1 of the storm season forecast. I will write my actual outlook in the coming week.

Feel free to add your own thoughts, or feedback on the post.